The Indian Living in Australia or the Australian from India

MELBOURNE: When I was asked to write about life in Australia, I really wanted to express the true nature of a country that has been my home for the past eighteen wonderful years. Far away from my Indian roots and further away from the bustle of Indian soil, life in Australia began in late 1994 for a family of three new to the culture, the people and the land.


So, I thought, how do I succinctly describe the reflections that Australia has shown me? Of all the words I could write, I want to first share a few truly Australian poems that still send a ripple of affection for this wide expanse of land that many are yet to discover. 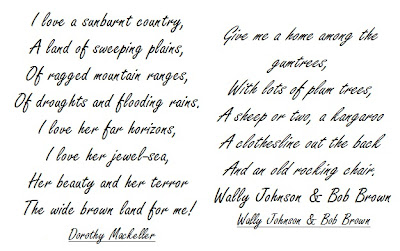 And with even more pride and love, I recall our unofficial national anthem…

The rustic beauty that is Australia, with the stories of Bushmen and the Dreaming of the Aboriginal natives are just some of the facades of Down Under. The metropolis that most of us Aussies relate to, especially those that have migrated is a canvas that has been painted on by many.

The influx of Indian migrants from the 80s and through into the 90s consisted of a generation that chose to leave behind an India that many young Indians now do not know of or can barely remember. Forget the bars, the malls, the IT companies and the late night call centers  My parents left an India that was only opening its eyes to Western capitalism. I tell you this because, for me, a child of the 90s, I had Australia all around me except inside my doting, 80s-minded and very much Indian household. For my parents, there was an eagerness, even slight desperation to hold onto every thread of India that was possible. At times, I would feel as though I was growing up in the Mylapore situated on the corner of Collin and Burke St.

Being the case, I was subject to weekly trips to and from a full-time IT professional’s home in Melbourne’s suburbia to learn classical Carnatic music. Soon to follow were the years travelling to and from the Swan St dance studio to learn Bharatnatyam. There was sometimes nothing more satisfying than seeing the puzzled looks that came my way as I sat on the city-bound train in a neatly tied dance-sari beside the hoards of slim-fitted corporate suits.

That’s what I love about Australia. It was a clash –no, amalgamation of hundreds of cultures in one train. From the suit to the kimono, the rock to the bhangra and the burger to the pavlova, Melbourne has it all. Australia prides itself on its diversity and so it should. Life in Australia would not have its impact if I had not had a close Greek friend or shared Phad Thai from a lunch box at school. There is a vibrancy that emanates from Australia, which is a culmination of its ‘true-blue’ Aussie “G’day” and the evergreen multiculturalism.

I had no reason to doubt that anyone would ever consider Australia to be unwelcoming, let alone, racist. This was a place that celebrated its color - black, white, brown or blue! My surprise and indignation was aroused by the inquisition I faced when I made trips back to India in recent years. I would be asked in cynical tones whether, “we still beat the Indian people in Melbourne?” Let me politely put a full stop to the myth that burly Australian citizens wander the streets with clubs seeking out the tweedy Indian student.

I wanted to really know why there was this sudden concentration of violence in a place that has never given me reason to fear. Melbourne, famous for being the most livable city in the world, was suddenly notorious for its violence and being questioned by those from even more infamous cities, like New Delhi. I mentioned the influx of Indian migrants through the 80s and 90s but there has been another spike in Indian arrivals over the past six to seven years. With visa rules being a little less restrictive than the States, Australia became the prime destination for tertiary education. Within a few years, universities became crowded with Indian students and soon Flinders St Station started to resemble VT in Mumbai. But life isn't easy for students; alongside studying into the wee hours they need a part-time job to sustain a decent lifestyle. Jokes can be made about the Indian boys that work the late shift at 7-11 and the Punjabi cabbies that deal with more than their share of party-goers, but the dark truth is that these students bear the brunt of a terrible exchange rate and high household expenses. With shifts finishing at ungodly hours of the night and housing only being affordable in less than desirable localities, many students face the, sometimes traumatic, experience of travelling alone in an unknown country. Without stating the obvious, I would like to point out that no matter which corner of the world you live, if you put yourself in a dangerous situation, you can only rely on luck.
I do not mean to blame these young men and women who are forced to make a pitiful salary and I most definitely do not condone the actions of the violent attackers but Indian Indians must acknowledge the raw facts that although there have been some unfortunate events, never assume that Australia hates Indians.

I lived in India for close to a year and I loved it. I experienced the buzz that it had to offer and the constant excitement that engulfed the country. Whether it was a political bungle or Diwali, India was a colorful place. Using hand gestures and stringing single Hindi words together I stumbled through my time in New Delhi and survived. Landing in Australia after my stint was the most comforting feeling. “Ah yes, home.” I thought to myself as I drove back through the neatly paved roads, where traffic rules weren't just a possibility. Structure is never appreciated until chaos is encountered. All said and done, I may admire the death-defying drivers in India but it is a great relief knowing that I can sit through a car ride in Melbourne without my heart stopping at ever turn.

Australia is known for being a really relaxed country. The beaches are golden and beer is famous. I love living in a country that has struggled to say my name but makes an effort to get it right. I love living in a city that is home to people that will strike up conversations no matter if you’re a stranger. I love being in a place, which is so far from everything that, sometimes, when nothing happens, it’s the greatest comfort. But that doesn't change the fact that I speak Telugu at home and love watching Rajini Kanth movies.

I have always felt the need to stay attached to my roots. Never once have I regretted wearing a bindhi to school every day for thirteen years. Never will I complain that I have more saris in my cupboard than pairs of jeans. I was and always will be an Indian born Australian. I will switch smoothly between accents when my mother calls and I will toggle between languages at dinner parties. It has been a pleasure living in Australia as an Indian. I have known the best of both worlds. Worlds that are separated by culture and seas but brought real close together by me.

She writes with skill and élan. She dances with grace. There is elegance, there is beauty in her movement and expression. Gayathri Srinivasan is a Writer, Photographer and Dancer. I am grateful for her contribution on this blog. There is a rarity of geniality in today's world, but Gayathri does it naturally. She has a disposition to be friendly and that makes her more beautiful. To know more about her, kindly check her website www.gayathri.in

All the photos on this post belong to Gayathri and prior permission from her is required to reproduce them digitally or by any other means.

MUMBAI: In my job that I'd do until sometime ago, I had to speak with Australians from different states of Australia. I would talk to them about Cinema, Literature and Sports aside from work. Trust me mate (they would often call me a mate), most of the times I've found them to be more polite than their Indian counterparts. In one of my chats with a nineteen year old girl who would get single parent pension, I learnt how much the country cares for its people. Australian government has invested a great deal of resources towards social work, education and health care. The country is one such modern civilization that has got many things that India could take lessons on. Immigrants from the subcontinent who migrated to Australia a decade ago are now well settled. Though it's easier to move down under on a study visa than countries like Canada or the US, getting a work visa is now not as easy as it would be few years ago. The Skilled Occupation List that Australian Government follows like it were a bible is now the guiding force on issuing work visa. So only when your profession is in demand in Australia will you be entertained. I've friends who have moved to Australia on a study visa. They enrolled themselves in courses that reflect in the list of occupations in demand. And a few managed to get a descent job after completion of their course. However, many ended up taking a study extension. Living in Australia is expensive. You will need to do all sorts of odd jobs to make ends meet. Immigration department carefully goes through every study visa application to ascertain high risk migration and subsequently reject those applications. Australia is clear on its immigration policy that they need a work force that they are in a short supply of. And the remainder of the jobs which don't require specialized skills can be done by the natives. Let us make it simple by juxtaposing the North India, Mumbai and Raj Thackeray situation back home. If Australia is a racist country then we are ahead of them in the race.
Posted by Faraz Salat at 11:30 AM

This is an excellent post. I too will be migrating shortly and was looking for an Indian outlook on what Australia is/ was. Can i get permission to share this post on my blog?

Thank you Hugh for reading the post. You can feed in the url of this post on your blog.

It’s really a great topic selected by you to discuss over here. Sometime it’s difficult to get approval on visa. Lot of people discuss such things online and try to find out solution for the same so sharing such things which relate to visa, can really help people.
Thanks & Regards,
Working Visa Australia

I can see that you're enjoying living in Australia, most of the experiences you shared was so amazing and it's sound like even now you are still amazed by things and places you have seen in Australia. This type of writings would boost and help the Australia to attract more immigrants to work for them that would help the continuing economic growth.

Thanks for sharing this informative blog. I have read your blog and I gathered some valuable information from this blog. Keep posting. Recently I have Studied about. australia work visa requirements for Indian citizens

The Permanent Residency Visa is a points-based system. You could apply for under the Subclass 189 or Subclass 190 or the Subclass 489 Visa in accordance to your eligibility.

Faraz Salat
Mumbai, Maharashtra, India
Admirer of all things that make up a global human society.